I packed my cross-eyed Hyundai full of people who like good music and we headed to enjoy the sun and sand at Jacksonville Beach and some decent Mexican food before the show at Freebird’s (owned by a former member of Lynyrd Skynyrd, so shout it all you want). It’s an interesting venue, two floors with an atrium, a full bar on either floor, so we headed upstairs to get a good view of the stage. 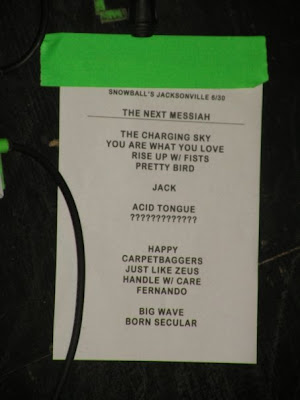 The Heartless Bastards opened the show, but they’re so good, I prefer to think of them as co-headliners (Metacritic shows both bands’ new albums at solid 75s), despite an abbreviated eight-song set (in no particular order) including “The Mountain,” “Out at Sea,” “You Could Be So Happy,” “Hold Your Head High,” “Early in the Morning,” “Swamp Song,” and “Sway.” I compared Erika Wennerstrom’s voice elsewhere to Grace Slick’s, and I’ve read others compare her to Janis Joplin, PJ Harvey, even Robert Plant. Let’s say she possesses the emotional urgency of the latter group and the vocal fog-piercing clarity of Grace. Erika’s a blue-collar angel belling over the crunchy, deeply felt blues-rock she and her band lay down. It’s a different band than the three-piece that toured with Lucinda Williams a couple of years ago. Erika moved to Austin after breaking up with Mike, the former bass player, and made The Mountain with studio musicians and, for the first time, a producer (Mike McCarthy), but because her vox and writing have always been the focus of the Heartless Bastards’ sound, The Mountain sounds like an HB record. For the tour she added old friends Jesse Ebaugh and Dave Colvin, who played on the original HB demo, and capable Knife in the Water guitarist Mark Nathan. The addition of Nathan frees Erika from having to carry so much of the sonic burden, and she seemed more relaxed at this show than she did in Tallahassee with Lucinda, less working the music and more loving it. I mentioned this to Erika after the show and she agreed that she felt more relaxed and that she enjoyed the added elements that a four-piece allows, including at one point a nice extended dual guitar jam. On the other hand, part of the relaxed mood may be because, as Jesse explains, “Touring with Jenny Lewis has been fun. They’re so funny and we’ve been laughing the whole tour.” 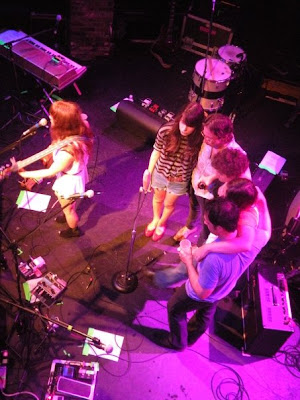 I suppose that’s not surprising given that Jenny Lewis spent her youth performing with the likes of Lucille Ball and the Golden Girls. She’s spent the last ten proving that video hasn’t quite killed the radio star, as her music achieves ever more mainstream cred, along with Elvis Costello’s seal of approval (and vox “Carpetbaggers”). After Rilo Kiley’s Under the Blacklight, it’s not surprising that she strutted onstage confidently, vamping like a trailer-park cougar. No more innocent promish dresses and Toys R Us keyboards for Jenny (Execution of All Things tour). She’s bringing back hotpants sass with energy and a wide smile. The crowd, populated by many young women, sang along and raised fists on cue, cheered and reveled over the course of her respectable set (list above) that began with the ambitious “The Next Messiah” and then moved back and forth equally between Rabbit Fur Coat and Acid Tongue, plus two new songs: “Just Like Zeus” and “Big Wave” and one Rilo Kiley song (“Silver Lining”). Her supporting band, including “boo” Jonathan Rice on lead guitar and duets, seemed very happy to be on stage with her. Barbara Gruska pinned down rhythm with deft drumbeats along with Jonathan Wilson on bass, while Farmer Dave Scher stepped out from rhythm guitar to bend fine and lonesome lap steel notes. Our little group, ladies and gentlemen all, fell in love with Danielle Haim (listen!), whose innocent look foiled Jenny’s vamping beautifully, and she seemed to be having more fun than anyone else, shifting from guitar to percussion to drums and backing up on vocals with spirited enthusiasm and a hell of a voice. The show ended with Danielle and Barbara hammering out a primitive drum duet to close “Born Secular” as everyone else left the stage.

We took our happy ears out to the beach’s more primitive soundscape and frolicked a bit before the two-hour drive home featuring a lively literary discussion about some British classics (“Heathcliff’s a dick!” “No he’s not!”).

Special thanks to our good friend Marty.
All photos by Rebecca Lynn.